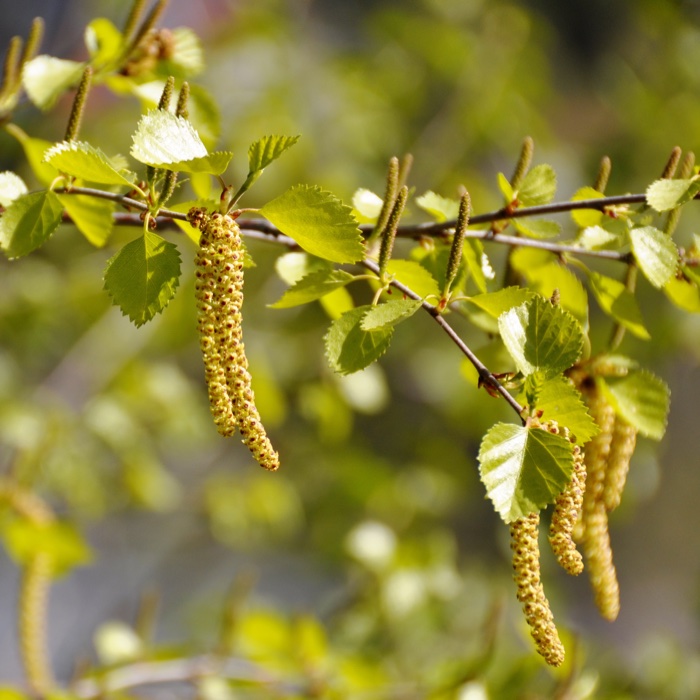 The name of the genus is a Latinism, it comes from the Latin betulla, which in turn is of Gallic origin. The plants of this genus are known in the Germanic countries as the Birke (Germany) and birch (English), from an Indo-European root *bherəg- , which means ‘shining, white’. Ornamental tree, deciduous leaf, often branched from the base, fast-growing and can reach 20m tall. The bark has a whitish colouring, particularly intense in the ‘Doorenbos’ variety. It has a paper consistency, it flakes with the time in slats revealing the younger rind which is even paler. The white colour of the trunk is due to a substance, betulin, present in the tissues located in the outermost part that become white in the sun. The leaves have a spiral arrangement on the branches, are provided with cordiform deciduous stipulations, doubly serrated margins, are dark green and turn into a deep yellow colour in autumn. The unisexual flowers usually appear in April-May and are grouped in pendulous catkins. The male ones have a yellowish colour and are 3-5 cm long, while the female ones have smaller dimensions and a greenish colour. The fruits are gathered in a cylindrical infructescence, formed by characteristic trilobe scales, which when ripe flake dispersing the winged seeds. Birch wood can be used for furniture, carving and plywood. From the wood and bark oils used as disinfectants, pesticides and in the tanning industry are obtained. In addition, the sugary sap is used after fermentation to prepare birch wine, beer and vinegar.

Curiosity: the bark was used in India as paper for religious inscriptions.