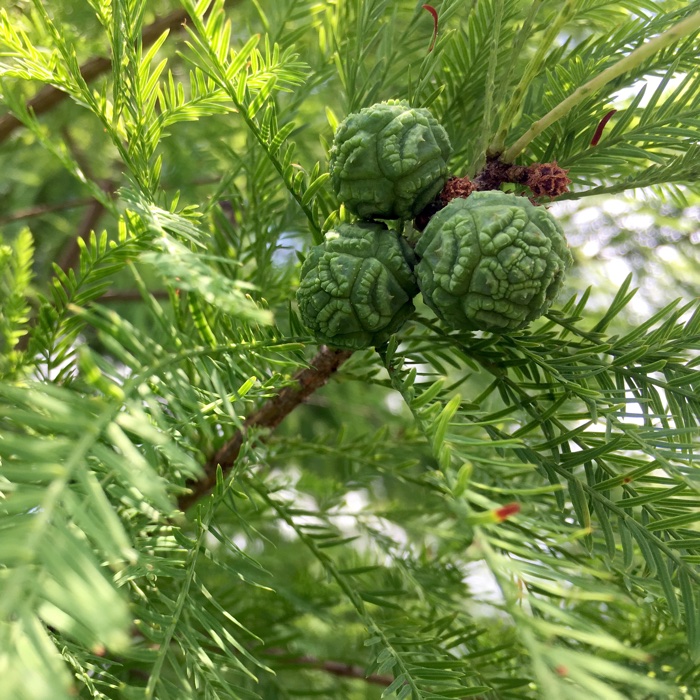 The name of the genus is given by the union of the two Greek terms taxos (yew) and eidos (shape, appearance), to indicate the similarity of the plant to a yew (Taxus baccata), especially as regards the leaves. The epithet distichum indicates the arrangement of the leaves on two opposite rows.

The common name is rather due to the appearance of the winter plant that retains only the main bare leafless branches. Introduced in Europe in the mid-seventeenth century, it is a very long-lived tree (up to 1000 years) that can reach 40 metres in height. It has pyramidal and majestic bearing in the old specimens. The straight trunk has a greyish tawny or greyish-brown rind, which is longitudinally brittle. In swamp areas, it has an enlarged base and is surrounded by large conical spikes up to one metre high (pneumatophores) that emerge from the muddy water and allow it to breathe.
The leaves are needle-like, flat and soft, of light green colour, 1- 2 cm long; they are distichous, opposite in sprigs of the same vintage and alternating with older ones; in autumn they acquire a reddish-brown colour, before fall. The male cones, ovoid and small, are assembled in groups on terminal ears; the female ones, at the base of the male ears, are greenish and roundish. The fruit is a brownish-green spherical galbule, which disintegrates completely when ripe.
In the United States, bald cypress wood, tender but resistant to fungal attacks, is highly employed. Elsewhere it is widely used as an ornamental plant, especially in soils with poor drainage and along the banks of urban parks.

Curiosity: it is one of the few dedicious conifers