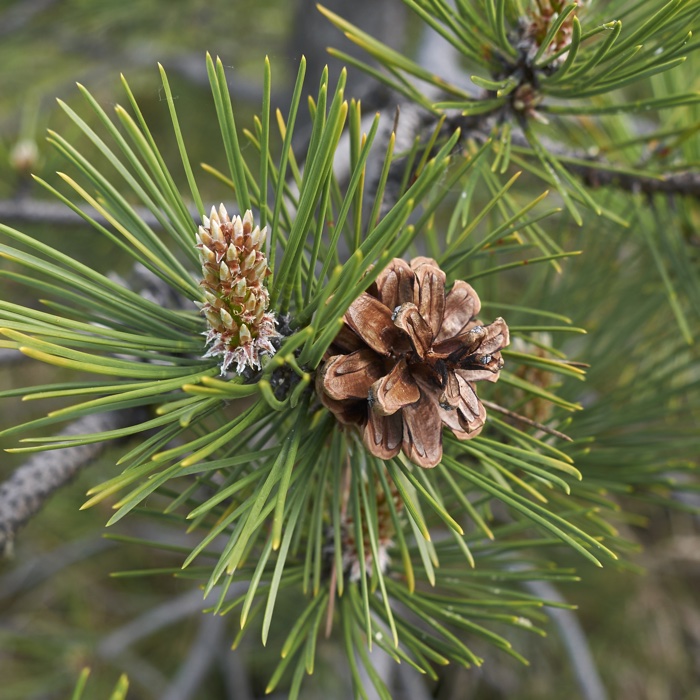 It is a conifer that adapts to difficult climatic conditions and poor soils, has cone-expanded bearing, and it can reach 20-30 m but there are unique specimens of over 50 m.
The foliage is dense and in young individuals tends to be pyramidal, over the years instead it becomes more disorderly and takes on a rounded shape with the top flattened.

Il trIts straight trunk has numerous branches at right angles arranged in overlapping stages. Older specimens tend to lose the lower branches. The grey-black bark is thick and furrowed on the surface by scales of irregular shape.

The dark, evergreen needle-like leaves come in groups of two, about 8-17 cm long, rigid and prickly.
The male and female reproductive structures are present on the same plant: the male ones are golden-yellow oval strobles that appear in groups, the female ones are red strobles that appear in pairs. The seed heads are brown pine cones, conico- ovoid and widen at the baseline when ripe. They appear on the plant alone or in groups of 2-4. The pine nuts inside are edible like those of the domestic Pine.

The wood is invaluable and is mainly used for construction and paper production.

Curiosity: it is a plant that can live a good 500 years.