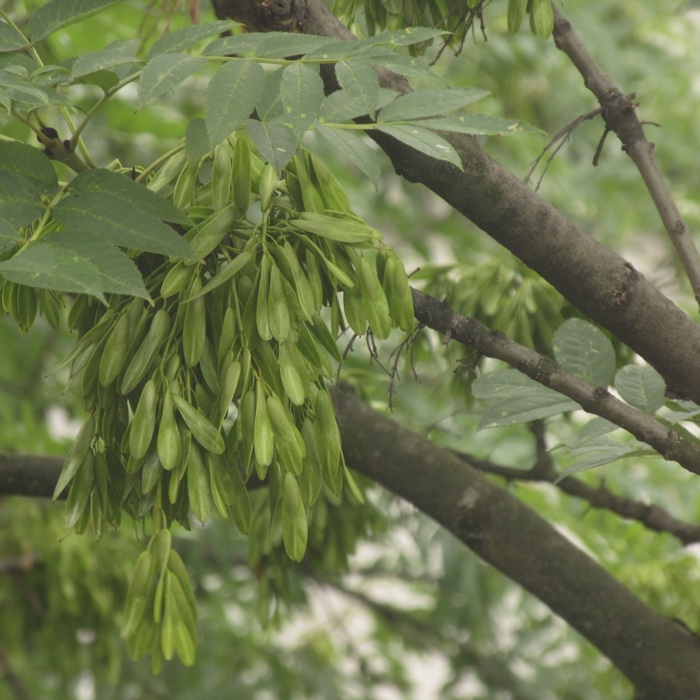 The genus, Fraxinus , has uncertain origins and according to some authors comes from the greek frasso ‘defend’, ‘assiepo’, while the strain, excelsior, Vigorous deciduous tree with an expanded and columnar posture that can reach up to 20- 25 m. It grows well in fertile and humid soils and is often used to create shady areas.
The bark is olive green to light grey in colour.
The deciduous leaves are dark green, opposite, pinnate, composed of 7 leaflets carried by a long petiole and are up to 30 cm long. During the autumn period these are tinged with a beautiful yellow-red colouring.

The fruit is a pedunculated samara, with a long wing that is easily dispersed by the wind.

The wood is economically important for its hardness and resistance. It is widely used in carpentry and furniture making.

In forest ecosystems in North America, it is an important source of food for mammals and birds using its seeds and leaves.

The juice of the leaves can be applied on mosquito bites to reduce swelling and itching.

In the United States it has been used for the recovery and reforestation of degraded areas.

Curiosity: the wood is used for baseball bats and electric guitars.