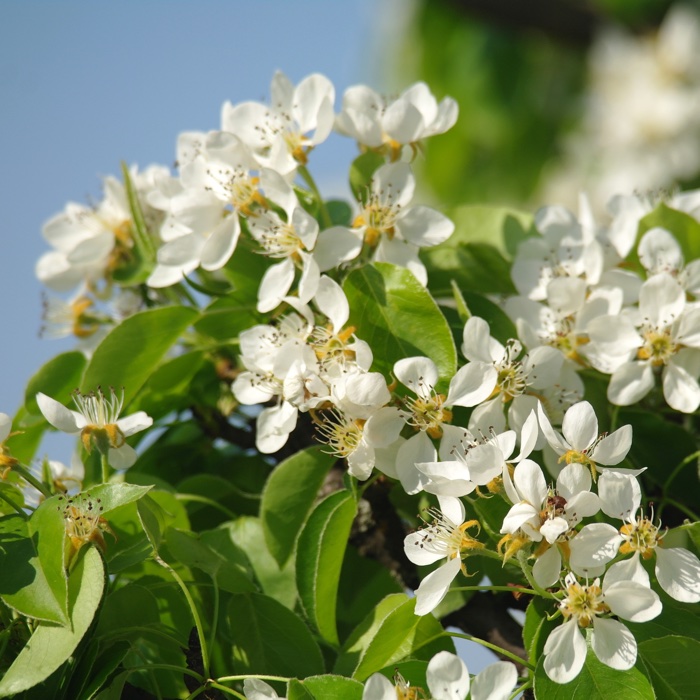 The genus name is similar to that with which the ancient Romans called the common pear, Pirus, itself derived from the Celtic peren (pear). The specific epithet was given in honour of the Italian-French sinologist Joseph-Marie Callery (1810-1862), who sent the first specimens of this species to Europe from China.
Deciduous tree native to China with excellent ornamental characteristics, pyramidal habit, up to 8-12 metres, smog resistant to water stress, intense cold, tolerates pruning and has a fairly robust growth.
The root system is tapering, very strong, and is able to live well in all soils, even the poorest and most stony, while it does not tolerate strong stagnation of water. It is excellent for use in sloping soils, where strong roots can help to consolidate the soil and avoid landslides.
The leaves are alternate, ovate, shiny and of leathery consistency, of soft colour in spring as soon as they sprout, then shiny green. In autumn, before falling, they colour early and take on warm, intense yellow, orange and red tones.
The white flowers, gathered in racemes, appear in April-May, before the appearance of the leaves and are very similar to those of the pear fruit. They are so abundant that, in the flowering period, the plant resembles
a white cloud. The flowers are followed by a myriad of small round fruits of a light brown colour, with a long peduncle, very appreciated by the birds.

Curiosity: the cultivar name comes from the rooster in one of the Canterbury Tales.