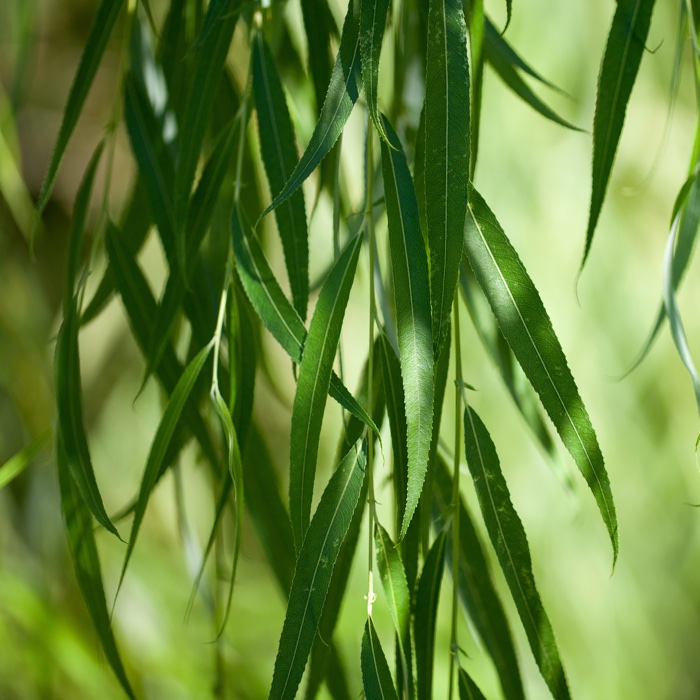 The etymology of the name seems to be of Celtic origin, from sal-lis, which means close to the water. Other interpretations refer to the Greek term salos, which means oscillation, in particular reference to the flexibility of the branches. The Latin word babylonica derives from Linnaeus’s misunderstanding that this tree was described in the Bible in Psalm 137. It is a deciduous tree with fast growth that normally reaches the height of 10- 15 m (but can reach 25 meters), with considerable resistance to cold, which prefers an exposure in full sun or in half shade, rich and deep soils. They can often be placed planted in places where many other species would suffer. In fact, they grow up without problems on humid and marshy ground. The branches are pendulous and thin, so the tree takes on a particular posture, sagging and downward, hence the common name of ‘weeping’ willow. The light green leaves, narrow, long, pointed and with finely serrated edges, are spirally arranged. In autumn, before falling, take a beautiful golden-yellow tone. The flowers, as in all willows, are grouped in catkins, which appear early in the spring. The male and female catkins bloom in April-May and appear on separate trees, the plant is in fact dioecious. The fruits are capsules containing numerous small seeds each with a tuft of white and silky hairs. Due to their characteristic and majestic demeanour, they are often used as isolated specimens in the meadows or near water.

Curiosity: willows have curative properties for fever and flu.