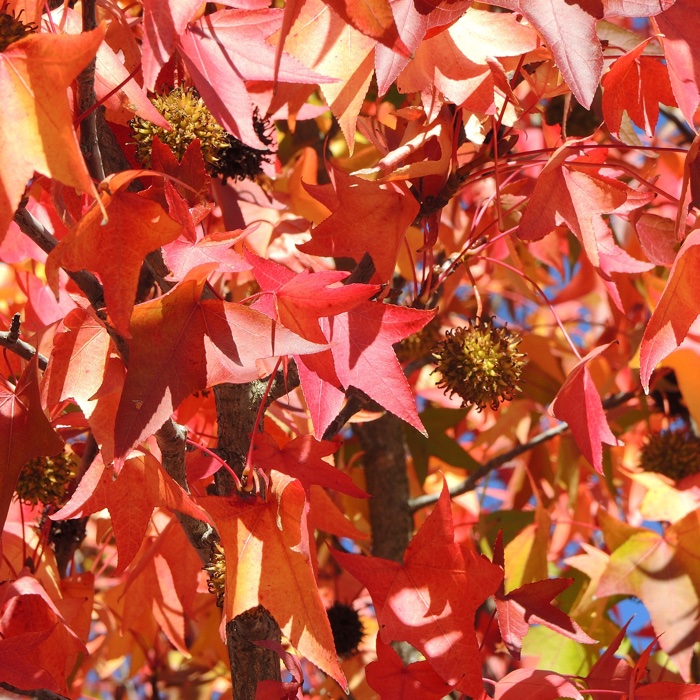 The name of the plant underlines, in both denominations the characteristic of this tree of secreting a resinous substance of amber colour. Liquidambar is a word formed from a Latin noun liquidus, ‘liquid’, and the Arabic ambar, ‘amber’. The term styraciflua instead means tree from which storax flows, a substance used in medicine, cosmetics and tanning industries.
Slow-growing deciduous tree that reaches 35 meters in height (up to 50 m in the places of origin) and 10 in diameter, with pyramidal foliage when the plant is still young and which subsequently tends to become roundish.
The leaves are shiny, dark green, alternate, palmate and star-shaped, and have 3-5 lobes with pointed apices. In the autumn period, before their fall, they take on beautiful colours that turn from yellow-orange to intense scarlet.
The stem has a brown, very wrinkled bark characterized by longitudinal furrows and deeply fissured suberose growths which become increasingly evident with the aging of the plant. Also the branches are characterized by the presence of these suberose crests.
The flowers are insignificant and appear in March. They are followed by numerous fruits, grouped in almost spherical infructescences with a diameter of 3- 4 cm, consisting of a set of capsules, each ending in a hook of woody consistency. These fruits, very ornamental, remain on the plant for many weeks and attract birds and other wild animals.

Curiosity: a fragrant resin is extracted from the bark.